Fiction. Based on a True YouBloom Festival. by Maya 14 minute read

Youbloom is an international music festival and a series of conferences. Now in its third year, the music groups that are presented range from Hip-Hop to Alternative Rock. Not only does Youbloom have a diverse set-list of performers, but it also covers a wide array of topics in their conferences. Some topics that are covered are “Women in Music”, masterclasses and a variety of panels. They all discuss the music industry so that people have the knowledge of what goes on.

Fiction. Based on a True YouBloom Festival.

Angelie did not want to drive to DTLA high, but something told her to leave the comforts of Belmont Shore and make the forty minute drive to DTLA.

She did not like Downtown–it reminded her of Shanghai–two extremes co-existing in a bustling city. It’s a strange transition from beach city to the urban ghetto fabulous, but the people who live in downtown–the artists, the filmmakers, the business folks–were all dreamers. They genuinely wanted to revitalize Downtown Los Angeles, and the dreamers who build skyscrapers in high places living side by side with the dreamers who blow white smoke from high faces both shared a deeper understanding of DTLA. This was the city of dreamers addicted to the hustle.

As she was walking from 4th and Main to 3rd and Main, where Lexington Bar was hosting Ronald Collins, she saw a tired, Black homeless man in rags, walking up to an Asian man, who was perched up against the rail of a posch dive bar. When he approached the Asian man, the Asian man turned his head away from the Black man’s solicitation, as if to say, “You don’t exist. And if I don’t see you long enough, I hope you’ll go away.”  She didn’t like the Asian man. Why did he have to feign ignorance? She didn’t like the Black man either. Why did he have to be homeless? And in that moment, she hated life, and reminded herself yet again, why she also hated DLTA. She was ashamed at the Asian man for looking the other way. Coward. She was ashamed at the Black man approaching him. Clean up.

She was rounding the corner on 4th and Main, a few yards away from the unmarked Lexington Bar. She suddenly heard a voice from behind her, “Hey pretty lady. How’s it going tonight?” She looked over, frightened. It was another Black man, sitting next to his bike with a helmet on. And as she looked closer, she noticed the bruises on his face. It was 10pm on a Saturday evening, and she felt she was just transported into the reality of The Walking Dead.

An automatic reaction overcame her, pre-conditioned by society to say that a single woman should have no business walking alone in the middle of Downtown Los Angeles, where rogues, high on drugs, could attack.  So she didn’t respond to the catcall. Unlike the Asian man she saw earlier, she responded by picking up her pace and scurrying across the street to avoid any conversations with humans who were black and bruised.

A surge of anger moved her. Didn’t he know the state of fear he has imposed upon her? Another surge of anger. How dare she judge the Asian guy earlier when she was no better? She was left with a bitter taste by the time she made it inside Lexington Bar.

As she was approaching the entrance, she saw a familiar face. *Saul, the YouBloom promoter, had invited her to enjoy the music. He gave her a welcoming hug and made sure she was good at the entrance. When she walked in, it gave off a speakeasy vibe. It was definitely a hole in the wall, and it had its hole in the wall charm–intimacy, secrecy, and transience.

Three African-American singers on stage, wearing black. Two Black girls wearing a black slim dress and a Black guy in the middle with a slick black suit, with a matching black fedora hat. Behind them, one Latino percussionist and a white guy on the guitar.  The crowd was diverse–local DTLA hipsters, rocksters, college students and artists. 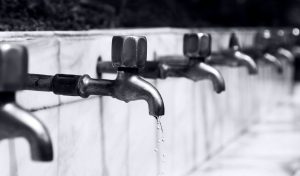 She was holding a bladder full of beer piss from a few hours earlier, and as she was beelining for the restroom through the narrow wooden platform past the bar, she damn near knocked the drink off one attendee’s hand. He gave her a mean look as if to say, “You just knocked $2 off my drink. Thanks jerk.” She gave him an apologetic look and immediately felt like a piece of shit.

Careless girl. She told herself. In an instant, she felt like injecting something poisonous into her system. She was nervous.

She ended up standing by the bathroom door for quite some time. Door was locked. Shit. She really needed to go. She had no choice but to bear the pain of a stretched out bladder, hoping that this wouldn’t turn into another urinary tract infection.

She looked to her left where the man and the two ladies were still singing. The tune they were singing sounded familiar.

“They tried to make me go to rehab, but I said, no, no, no,”  the man sang. Amy Winehouse. Interesting. This must be one of those cover band nights.

The girl in the bathroom was taking forever. When the song ended and the crowd started cheering, he started talking to the crowd.

It took her a few seconds to realize that this was the man she drove across town to see.

Ronald Collins, a soulful musician with a voice as powerful as a California earthquake, was dressed to the nine, looking like Slick Rick on that stage. One would have never guessed that nine months ago, he was living only a few blocks from this venue, on San Pedro St somewhere, the heart of DTLA’s most notorious slum, also known as Skid Row. He was flirting with death and a slave to liquid crack and heroin.

“It was by the grace of God that I was able to pull through. God is amazing.”

He put up his hands in the air and gave a moment of sacred silence to the almighty for this miracle.

When she finally got her bathroom break, she came back to the stage, curious about Ronald. Fortuitously, she recognized Saul’s girlfriend from the Long Beach Music Tastes so Good festival, where they had initially met. She was the first to greet her with a warm smile and all Angelie could do was stiffen like a frightened possum. It wasn’t that she didn’t like her, and it wasn’t even that she disliked the scene. She just felt like being alone–by herself. She was just like her friend, Joey, who she had invited multiple times to this event but he was so depressed that he couldn’t even get out of bed. But she had put on her journalist/social entrepreneur hat, so she had to push through.

Applause from the crowd.

Ronald switched outfits. After the Winehouse song, he started to play his own originals. To highlight the difference, he switched out his clothes and put on an African garb, and this somehow got her full attention.

“I began praising the Lord. He delivered me from my lonely heart,” he said. “This song is special. It was written at a time when I was lost. I’m going to do this one acapella. It’s special. And it represents my lonely walk with God through my trials.”

The crowd fell silent in anticipation.

“Wet tears streaming down her face,” he began. The first line pounded into the souls of the room. Shivers ran down Angelie’s spine.

“She talks to the lord each and everyday. She prays,” he continues. The voice is raspy. The blues is grassy.

The spirit of God cracked her stiff body open.

She felt excitement for the power of his voice, she felt shame for having ignored the bicyclist a few moments earlier, and she felt rejuvenated by the spirit of the song.

All these mixed emotions in the wake of the silence between cadences.

The pause in between breaths captivated the crowd.

Is all we want. Documentaries

Our struggles in plain video,

Plain as the man without a home, walking up to the man with a home who was waiting for his Uber, so he could say to the soon to be Uber passenger, “Mr.,  Please see me for who I am.”

The Asian man would reply to the Black man, “Mr., I see you. You are in pain. And you are so talented. If you break out of the goo, you will begin to see the man for who you truly are. And not this. Not like this. You are better than this.”

“Thank you,” the man without a home would say.

“Thank you,” the man with a home would reply.

And this is what music from a man who was addicted, a man without a home, could bring. It can bring people with homes to look at people without homes with intention, and bring the courageous to sing their pain–sing it painfully enough for all of us to start feeling again. Sing it powerfully enough so we can acknowledge each other for our pain, so we can say, “Please sing. I want to hear (y)our song.”

Based on a True Indie Rock Night on Sunset Blvd. by Grace Canning
Next: BYHO Journals

Fiction. Based on a True Full Circle Venice Experience. by Maya
Be the first to leave a comment!